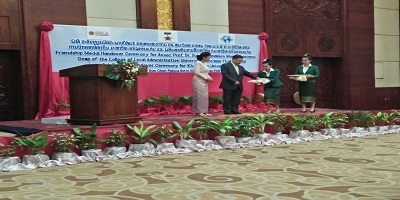 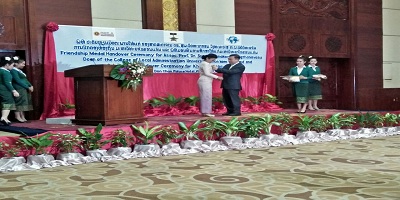 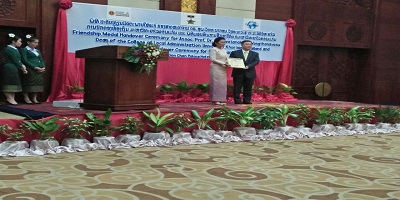 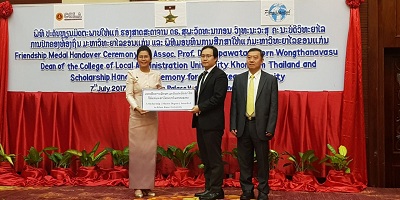 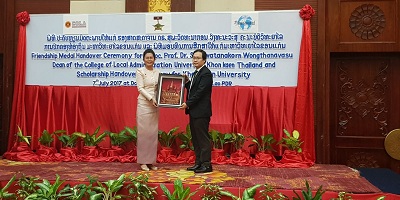 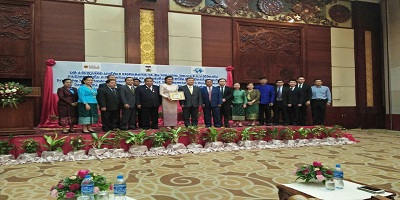 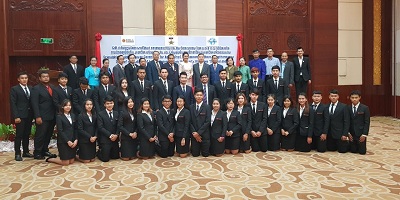 The Lao government awarded the Friendship Medal to the College of Local Administration, Khon Kaen University of Thailand for outstanding achievements in work cooperation and coordination with the government and private education sector.

A Committee Member of Lao Front for National Construction Prof. Dr Od Phongsavanh, on behalf of the Lao government, who is also Honorary President of Phongsavanh Group, awarded the Friendship Medal to Assoc. Prof. Dr Supawatanakorn Wongthanavasu, Dean of the College of Local Administration.

The ceremony was organised on Friday in Vientiane with officials, company representatives and Thai students attending the ceremony.

Dr Supawatanakorn thanked the Lao government for all the support that has been given to the College of Local Administration and the all kind cooperation and assistance.

Mr Somboun said the scholarships are for Lao students interested in pursuing their master degree in Khon Kane University in any beneficial field.

Vice President of Phongsavanh Group, Mr Thetlakhone Douangsonthi, said at the ceremony that Assoc. Prof. Dr Supawatanakorn had made an outstanding contribution to cooperation between Phongsavanh Group and Khon Kaen University.

In recent years Phongsavanh Group and Khon Kaen University have not only cooperated and coordinated among the government sector but also the private sector - education sector.

Khon Kaen University has provided many scholarships -bachelor and master degrees - to Phongsavanh staff members and training on crop cultivation and animal husbandry for local communities in Laos without training fees to upgrade local people’s capacity and knowledge in agricultural production and income generation, and improving living standards among Lao people.

“The achievements are not only tightening and strengthening the relationship between Phongsavanh Group and Khon Kaen University but also contributing to human resources development and poverty reduction among Lao people and this helps support socio-economic development in Laos,” Mr Thetlakhone said.

“Through our mutual efforts, I believe that our cooperation between Phongsavanh Group and Khon Kaen University in the next few years will be intensified particularly cooperation on human resources development in all work fields to upgrade people’s capacity, skills, and knowledge to be able to apply scientific techniques to their own duties and raise awareness and understanding between two nations.”

“This cooperation contributes to socioeconomic development in Laos with the tremendous effort to achieve the expected goals government targets in order to graduate the nation out of the list on a least developed countries by 2020 and completely eradicate poverty by 2030.”

Phongsavanh Group has grown step by step under the founder's vision of conducting a profitable business enterprise, juxtaposed by bettering people’s quality of life and consolidating economic expansion.

The timber industry emphasised the export of processed wood, which ended in 2008 in line with the government’s policy to preserve the country’s forests.

Phongsavanh Group has participated in the socio-economic development of the country, paying taxes to the government annually.

It is a donor to ministries, organisations and the grass-roots level and has assisted in times of natural disaster such as drought and flooding, as well as supporting national sports activities and important events.

To apply the Party’s Three Builds directive, it supported the policy by providing loans at low interest rates to farmers to help reduce their poverty.

Last year the government praised and awarded many medals and certificates of congratulations to Phongsavanh Group.

The Group has good coordination with Vietnam, Cambodia, China, Russia and Dubai, in the exchange of merchandise and investment.

It also has representative offices in Vietnam, China, Thailand, Singapore, Malaysia and Myanmar that have helped Laos to become well-known regionally and internationally.